Over the years, Carl Anderson and I have often found ourselves working at the same New York City schools, with Carl supporting the same teachers in writing that I support in reading. Frequently in those schools, a teacher will respond to something I’ve said with, “That’s just like what Carl was saying about writing,” which suggests she’s seeing a powerful reading-writing connection. Rarely, though, do Carl and I find ourselves in the same school on the same day. So I’m thrilled to be presenting with him at NCTE this year, where we’ll look at conferring with readers and writers and as an act of advocating for students’ agency, thinking and voice.

While we’re still finalizing plans for the session, we’ll both be setting conferring within the context of students meaning making. In writing, this means ensuring that students have time to really explore and think about both what they want to say and how they might say it—which is precisely what I think my daughter, who I wrote about last week, didn’t get. The 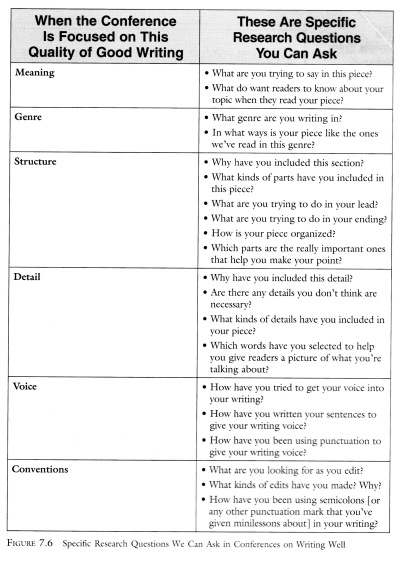 primacy of meaning is why it’s at the top of Carl’s assessment of writing traits check list from his great book Assessing Writers, which I always share with teachers whenever I’m working on writing, along with the chart from the same book on specific research questions you can ask students during a conference.

I think of this charts as a hierarchy (and a great crib sheet for teachers to keep in their conferring toolkits), with meaning as the most important trait. This means that you wouldn’t want to teach something in a conference about any of the other traits unless a student really knew what they wanted to convey. And that could be revealed in either the student’s draft or their answers to your research questions.

Similarly, I put meaning making at the heart of reading conferences, using a framework for thinking about meaning that Dorothy Barnhouse and I shared in What Readers Really Do. There, in the chapter “What We Mean by Meaning,” we adapt the work of the literacy scholar Robert Scholes to the language of K-12 classrooms and break down the thinking work of meaning making into the following three components or strands: 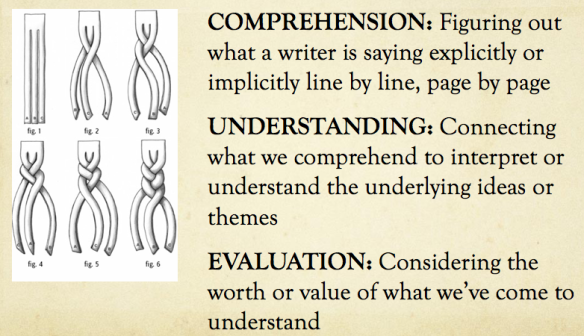 Adapted from What Readers Really Do by Dorothy Barnhouse and Vicki Vinton (Heinemann, 2012).

As the braiding graphic suggests, readers weave these different strands of thinking together as they read in order to construct meaning. But it’s hard, as a reader, to engage in the work of understanding if you haven’t comprehended something basic, like the identity of a first person narrator or how certain characters are related. So one of the challenges in reading conferences is figuring out what kind of thinking students are already doing and where they might need some support—and this challenge is compounded by two facts: You may not know the book a student is reading and you won’t have the same kind tangible draft of student work to look at as you do in writing.

In my session with Carl, though, I’ll share how you can get a window into students’ thinking by having them orally ‘draft’ an understanding of a passage from whatever book they’re reading as you read it alongside them. Then I’ll show you how to use the three-strand framework for meaning, your own draft of the passage, and specific research questions to decide what to teach, all of which can be seen in this flowchart from the new book, which captures the different common paths meaning-based reading conferences can take.

I’m hoping that some of you will be able to join me and Carl in Atlanta. And if not, here’s some other places I’ll be in the upcoming months:

And for those of you who are unable to travel, you can hunker down with me at home or in school or join me online after March 23, 2017, when Dynamic Teaching for Deeper Reading comes out, with this incredible cover image created by my partner, the photographer David Wagner and his special effects friend Robert Bowen 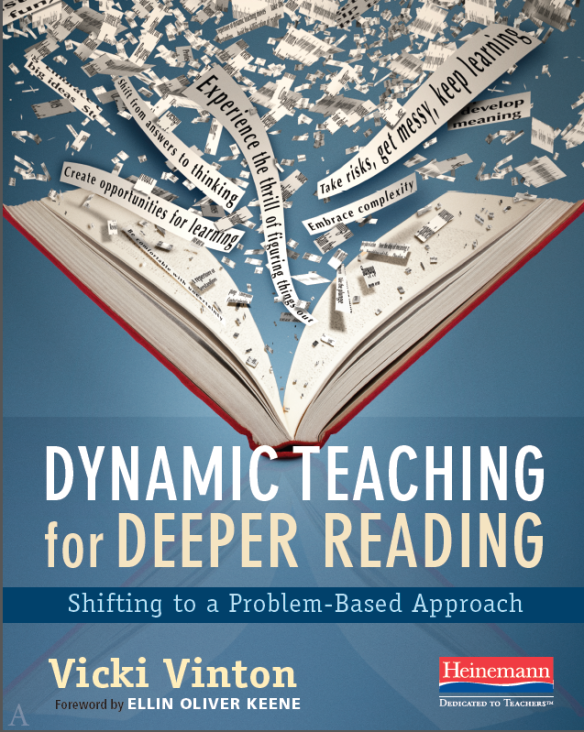 And now I’ve got to check out the NCTE app and start planning for what I’m sure will be an amazing convention!