Last week I shared how a group of third and fourth grade teachers deepened their students’ understanding of realistic fiction by introducing the concept of character flaws. Framing instruction around this vision definitely helped make the students’ stories more powerful. But once they began to develop ideas in which characters were complicit in the problems they faced and had to change to solve them, there was still lots of teaching to do. And we determined that teaching not just by returning to the unit plan but by using the critical practice of looking at student work.

Teachers, of course, look at student work all the time, often on their own, as they check assignments or pre- and post assessments for the purpose of evaluating or seeing if the students got something or not (which, if they haven’t, usually means the next step is reteaching). Writing in Educational Leadership, authors Angie Deuel, Tamara Nelson, David Slavit and Anne Kennedy call this “the proving approach” to looking at student work, which is guided by the question, Did the students get it or not? And that’s different, they write, from what they call “the improving approach,” which teachers should ideally do collaboratively in order to explore a different question: What are students thinking?

According to the authors, using an improving approach to looking at work supports

“more generative conversations about student work. Teachers’ discussions yielded different questions that teachers wrestled with; those questions led to additional questions and sometimes to spirited debates about what teaching and learning should look like. Teachers sharpened their thinking about instruction, learning styles, content, formative assessment, the role of the teacher, and student engagement.”

This approach to looking at student work was precisely what led the teachers I worked with to rethink the way students were planning their stories. And studying the students’ work, we also realized that we needed to think deeper about what we were teaching them not just about planning but drafting and revising.

To see what I mean, take a look at both this fourth grade student’s story mountain along with his initial draft and consider what the student reveals about his understanding of both planning and writing stories—that is, what do you think is going on in his head? 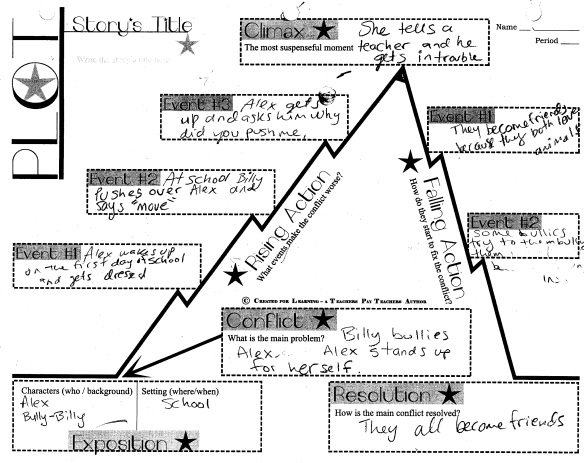 In a sense this student did exactly what he’d been asked to do: He filled in all the story mountain boxes and used that to create a first draft. He also revealed an understanding of the concept of a climax and, perhaps, that characters need to change in order to solve their problems. But if you looked carefully at the first three event boxes, you may have noticed that he seems to have broken down one event into three, which suggests he has a fuzzy idea of what a story event is and how stories tend to complicate things before they resolve them. Additionally, he doesn’t seem to have a vision of the difference between planning and drafting, as he seemed to rewrite what he wrote in the boxes for his draft with only a few added details. 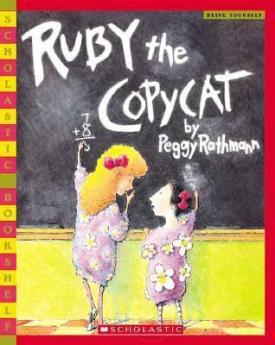 Recognizing these misconceptions, we then had to think about how to address them, which is one of the challenges of an improving approach. That’s because, as the Educational Leadership authors write, “taking an improving stance often unearths the formidable complexities of teaching and learning that stay hidden when the focus is on making cutoff scores.” We considered, for instance, offering a lesson on dialogue or leads, but while those would provide students with a strategy for drafting, it might not give them that deeper understanding of the difference between planning and drafting and of summaries and scenes. So we returned to one of our mentor texts and designed a lesson, which I then taught, that explicitly addressed those misconceptions while also providing a vision of craft.

To implement the lesson, I first created a chart that showed what Ruby the Copycat author Peggy Rothman might have put int the Event #1 box if she’d filled out a story mountain worksheet:

Then once the students had gathered on the rug, I introduced the chart then read the following from Rothman’s book, asking them to consider this question (which I invite you to think about, too): How are these pages different from what’s in the box?

Of course, kids being kids, the first thing they noticed was the book said Ruby sat behind Angela, not next to her as I’d written. But as you’ll see below, they went on to notice much more, beginning with the fact that there were more descriptive words. 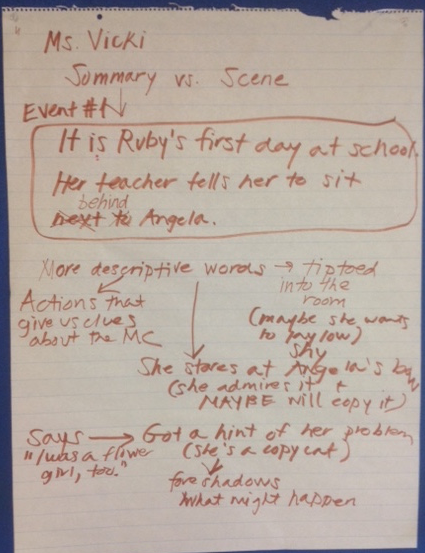 Because I didn’t want them to arbitrarily add more descriptive words to their pieces for the simple sake of being more descriptive, I asked if they could give me an example, which brought out the lines about Ruby tiptoeing and looking at Angela’s bow. Building on that, I then asked if they thought those details did more than just describe what Ruby was doing, and the students all said yes. Those details gave them clues about Ruby—that she might be shy or want to ‘lay low’ and that she admired Angela’s bow and might want to copy it.

In this way the students were grasping another concept I wrote about in an earlier post on show, don’t tell: that writers actually show and tell, conveying information through the details they choose. And the students thought the dialogue was doing this as well. It gave the reader a hint about Ruby’s problem which, to the delight of the observing teachers, one of the students named as foreshadowing.

Studying the beginning of a mentor text this way definitely gave the students a deeper vision of a scene versus a summary and of planning versus drafting. But having a vision doesn’t automatically mean being able to replicate it on your own. For that learners, be they children or adults, need additional practice, and I’ll share how we offered that in another post. For now, though, try to keep that distinction in mind: Are you proving or improving when you look at student work?

24 thoughts on “Determining Next Instructional Steps: Looking at Student Work Through an Improving Stance”